Qt Design Studio is a powerful tool for designers and developers that can be used to create professional user interfaces (UI) with the Qt framework for desktop, mobile, MCU or embedded devices with a single codebase.

At ICS, we deal with in-house teams and teams of developers and designers from outside companies, including those of our customers. Collaborating with designers and implementing the functional requirements of an application is not an easy assignment. The addition of Qt Design Studio in the development lifecycle has helped ease the development process for everyone involved, hence saving time and money.

As a developer myself, I know that a key challenge involves developing a UI. Often, there seems to be a disconnect between the designer's UI design ideas and what developers can do to bring the design to life. This lack of understanding is typically due to the design and development teams using different tools, each with different capabilities.

Qt Design Studio bridges the gap by allowing the designer's vision to be compatible with the development tools, creating an easy way for both teams to interact with the end-product hence solving this intrinsic issue.

Conventionally, UI designing starts way before the application's development stage hits. But with the designer's UI and developer's work under the same roof, Qt Design Studio can bring the development workflow to a whole new level, and the relationship between designers and developers closes up.

Qt Design Studio adds the capability to allow designers to build some of the UI themselves, which provides support to developers way before their work progresses.

UI states and animations are already tested on the end-user hardware early in the development process, reducing development time. Seeing designs come to life early allows developers to add dynamic behavior to UI with its testing and iterating processes at very early stages of the software development life cycle.

Early deployment and live preview of applications in an actual embedded environment help developers and stakeholders reach an early stage of the visual agreement. Qt Design Studio is not a magical tool that transforms UI into QML files in just the blink of an eye. Sometimes, issues arise that are solved by taking designers into account!

In addition, because Qt Design Studio comes with graphic libraries that do the graphical heavy lifting itself, developers are free to focus more on the application's functionality to provide a quality product to the end user. Traditionally, developers were focused mainly on application development and its functionality testing from early to final stages of development using an incremental approach. To overcome this time-consuming challenge, a Simulink-based, system-level logic simulator is provided.

Simulink is a MATLAB tool for testing, analyzing and simulating multi-level dynamic systems. A Simulink connector can be used to connect simulation data with the application's frontend. A developer can send or receive data with applications developed with Qt Design Studio using its integrated Simulink plugin that can be installed in your system. This tool can be run simultaneously with Qt Design Studio for real-time simulation and testing.

With Simulink, parallel implementation of UI and control logic is possible. This helps in anticipating integration-based testing before actual software development. 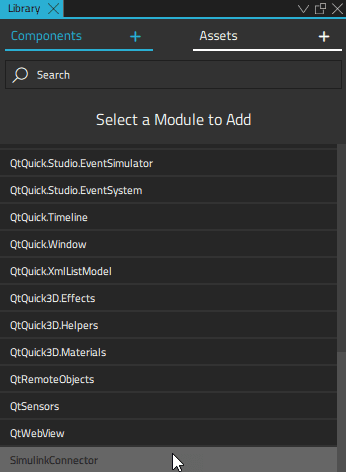 With the inclusion of Qt Design Studio in the software development lifecycle, UI development has become much easier due to UI simulation and testing stages happening toe-to-toe with its development. Pre-testing the UI has encouraged designers and developers to work freely without fear of miscommunication, reducing time to develop and deploy.